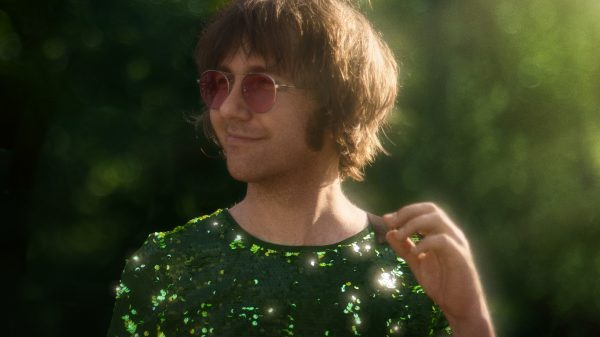 Every now and then an artist comes along who makes you remember why you started listening to albums in the first place: Aaron Lee Tasjan is that artist.
With his wrecked cool, off-center charm, and restless creative dazzle, he makes music with conviction and arch mystique that has its roots in rock’s murky past, armed with an arsenal of songs that spill over with humor, intelligence, irony, personal vision and at times prophecy; pushing boundaries of taste and imagination to new heights, unrestrained by genre or subject matter. Songs that speak to the tribe.
An obsessive creative, Aaron Lee Tasjan writes pop songs with a twist, a little overdriven, far too honest at times—performing them like ragged rock tunes that careen a little too close to the edge without actually falling over into the abyss, and autobiographical to a fault. One listen to “Feminine Walk,” the musician’s blatantly confessional song on Tasjan! Tasjan! Tasjan!, you realize he is the legitimate heir to early rock ‘n’ roll’s sly sexual sedition. He updates the idea of androgyny but dispels the emotional and social ambiguity with lyrics that reflect his own geographic and artistic wanderings. Beginning in his early teens they took him from Delaware to California, to Ohio, to New Jersey, to Massachusetts, to New York, to his current home in Nashville, always looking for his psychic and musical locus.