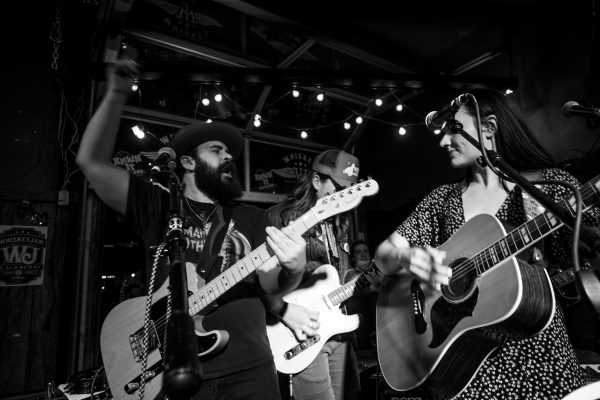 Damon Atkins grew up in Surry County surrounded by music. His dad taught him to play guitar after receiving one as a Christmas gift and the boy has put that gift to use. Now Damon resides in Nashville and spends most of his time writing and touring with his group, LoneHollow (Atkins has also toured with Jaime Wyatt, Sam Morrow, Time Sawyer). The band has just released a fantastic new EP (self-titled, LoneHollow).

Throughout the five songs on the release, vocalist Rylie Bourne & Atkins dive head-first into a complete portrait of love — the all-encompassing shiny feeling it can bring about as well as the actions it can make you regret. With a rollicking, Southern rock-infused version of Americana, the two remain true to the tradition of country storytelling.

“Basically anything I play comes from a Southern rock or blues background; if I had to give myself something that’s sort of a signature, I’d like to think it would be slide guitar and Southern rock riffs,” Damon continues. “But Rylie, and her dad, have taught me a tremendous amount about bluegrass over the past few years.”

Recorded in Nashville at Farmland Studios with producers David Dorn and Alex Torrez, the self-titled EP showcases Damon’s blues-infused guitar work along with Rylie’s crystal-clear vocals for a high-energy welcome to who LoneHollow is: “There is a rock’n’roll element we always seem to maintain, which is probably my fault with distorted guitars, but we really aren’t rock’n’roll,” Damon says. “There is a bit of a traditional, lonesome sound that we maintain with Rylie’s vocals, but we also aren’t a bluegrass band. The first time I listened to the finished EP all the way through I thought to myself, ‘What the hell would you call this?’ I think the fact we really don’t have an answer for that means it’s original.”